For those who want to enjoy real ecotourism in Costa Rica, Sarapiquí offers great natural attractions, where you can learn more about its nature, flora and fauna. By visiting its rainforest areas, rivers and tourist attractions, it helps your community, which works together with several private organizations to maintain a sustainable and responsible tourism.

Although its maximum extension is in the plains of the north of our country, to the south and the west, the canton of Sarapiquí shows a mountainous topography, which shelters the slopes of the hills of the Central Mountain Range and some of its foothills. From the lowlands to the highlands, the relief rises in large terraces, which are very fertile.

Geologically it is composed mainly of materials from the tertiary and quaternary periods, with quaternary volcanic rocks that dominate the region. It has two geomorphological units, called alluvial sedimentation and volcanic origin.

The fluvial system of this canton is for the U-North slope of the Caribbean slope, to which the Sarapiquí river basins and Cireña Chirripó belong.

In Sarapiquí, the predominant vegetation consists of forests, pastures, reforestations, charrales, tacotales, annual and perennial crops, among which are bananas, coffee, fruit species and, more recently, pineapple. There are innumerable varieties of reptiles, birds, mammals and insects.

The climate: </ strong> Sarapiqui is located in the torrid zone, therefore, it has a tropical climate with a dry and rainy season. The winter is from May to January or February and the dry season from March to May, with some sporadic rains caused by cold fronts from the north. Towards the mountains, with an average altitude of more than 187 m above sea level, the climate tends to be mild, generally accompanied by a pleasant breeze that keeps it cool. In the middle zones, about 68 m above the sea, the temperature increases and continues towards the lower parts, the Atlantic plains, with an altitude of approximately 37 m above the sea.

The average temperature is 26 to 28 º C, relative humidity of 80-90% and solar radiation of 3 to 5 hours a day, a hot and humid place that can be traversed through a wide network of natural trails within its many protected areas. , its forests, its wetlands, etc., which are of great importance for the conservation of flora and fauna.

To get there: </ strong>
From downtown San José, take highway # 32, which is the same to Guápiles and Limón.

WHO IS WORKING THERE ?

The Sarapiqui Conservation Learning Center (SCLC) is located in the northern Caribbean lowlands of Costa Rica and serves many of the communities between the towns of Puerto Viejo (de Sarapiqui) and La Virgen. Our mission is to “link communities and conservation through education and ecotourism”. SCLC is managed by an international board of directors and represented locally by an Executive Director, a receptionist, and an international group of volunteers.

SCLC, offers many programs designed to benefit the local communities and the ecotourists alike. For the visiting tourist wanting a taste of Costa Rica beyond the usual tour stops, SCLC offers local cuisine cooking classes and traditional dance classes. One can also visit a local farm and witness this essential part of life in the Sarapiqui region. For the ecotourist that really wants to step out of their comfort zone, we offer a very popular ‘home-stay’ program that allows the tourist to spend the day (and a night) with a local ‘tico’ family. There is no better way to experience Costa Rica than to live as a ‘tico’, even if it is for only just one day.

In addition to the programs and activities aimed at the ecotourist, SCLC has many programs tailored to help the community (help itself). To this end, SCLC offers the local community 5 levels of English as a Second Language (ESL) courses. As the tourism industry in the area grows, the need for English in this zone will grow along with it and SCLC hopes that our students lead the way. Along with the popular English program, we also conduct environmentally themed classes at 4 of the local area schools. This program gives SCLC direct access to the residents and aims to educate them on the benefits of conservation and living in an environmentally friendly way. Although these 2 programs are very important to the mission of SCLC, we offer so much more.

SCLC also has a growing After School Program (ASP) that gives students from a local school an outlet to explore science, conservation, and ecology. For the aspiring field guides in the region, we have a Bird Club (Club de Aves) that meets every other Saturday with the goal of educating the students in the wealth of bird species that also call the Sarapiqui area home. We are also very proud of our Scholarship (Becados) program. Although public education in Costa Rica is free, many families in this region have financial difficulties and the Becados program helps with funds to be used for uniforms, books, traveling (to school), etc… In exchange for these funds, our scholarship students must maintain high grades, write their sponsors, and participate in various environmental educational activities.

SCLC´s goal is help our community help itself through increased knowledge of the environment, land conservation, English, and the tourism trade. We truly hope and believe that as the area becomes more popular with the casual tourist as well as the ecotourist, our students will be ready and able to support the growth.

Together, you and the SCLC will be helping to fashion a greener future for the Sarapiqui region. Please come by if you are ever in the area…or better yet, make plans to visit our area and stop on in.

To learn more about the Center or to make a donation, visit: www.learningcentercostarica.org/index.php
E-mail:[email protected]
Tel/fax:(506) 2766-6482 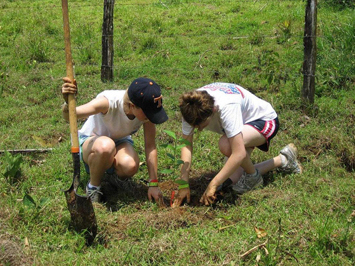 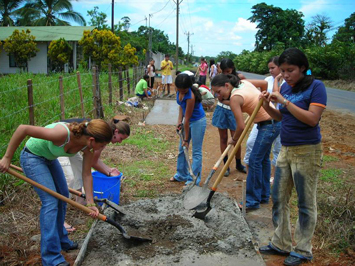 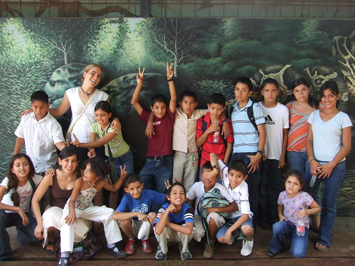